It is possible to find in Olhão, since prehistoric times, vestiges of colonies that prove the occupation of this territory in ancient times. The oldest written reference to Olhão goes back to 1378 and, at the time, the town was designated as a place called Olham.
The proximity of the sea bar and the existence of water in abundance were decisive factors for some fishermen, in the early seventeenth century, to settle on the beach of Olhão. The village developed against the will of the authorities of Faro, to whom the lands belonged. This growth was only possible due to the protection of the St. Lawrence’s Fortress dating from the mid of the XVII century, which, despite its precariousness, had the important role of monitoring the entrances to the bar and discouraging the attacks of the pirates.
The increase of coastal and offshore fishing, as well as, the commercial trade, gave origin to an important demographic population growth and, in 1695, the inhabitants of this place require to the Bishop the detachment from the parish of Quelfes, reason why the Parish of Our Lady of the Rosary of Olhão was created.

During the French occupation of the Algarve, in 1808, arose in Olhão, on June 16, a spontaneous and genuine popular uprising against the invaders' abuses. This revolt culminated with the expulsion of the French from the place of Olhão and, by impulse, from all of the Algarve. In the following month, 17 men sailed from Olhão towards Brazil in a small boat, known as Caíque and typical of Olhão, called "Bom Sucesso", following the mission to bring to the Portuguese Royal Court in exile in the Brazilian colony the good news of the French defeat. This crew took with them a missive, unofficial, in which was described the bold attitude that Olhão had in this revolt. The reward was translated into a permit with the force of law with which the Regent Prince decided to distinguish Olhão and its inhabitants, so Olhão ceased to be only “one place” and was raised into Vila (small town) known as Vila de Olhão of the Restoration.
The transition to village (Vila) involved the creation of a new municipality, with local autonomy, which did not occur until 1826. In this year, the Olhão Town Hall was built, creating, for this purpose, a status and place for a Judge (Juíz de Fora) who, at the time, presided over the Municipal Council.

In 1835, the parish council of Moncarapacho became part of Olhão's mandate, and the following year, the city council took possession of the parishes of Olhão, Quelfes, Pechão and part of the parish council of Moncarapacho.
In 1874, a judicial division of Portugal took place, which definitively determined the constitution of the municipality of Olhão, with the five current parishes: Olhão, Moncarapacho, Quelfes, Pechão and Fuseta.
As time went by, the small fishing village became an important economic, social and urban center, such as so, that, in 1985, it was raised to the category of Town. Olhão The Village of the Restoration, becomes Olhão Town of the Restoration.

Nowadays, the town of Olhão is more “cosmopolitan”. The 5 star Hotel, the Maritime Recreation Port/Marina, the reclassification of degraded areas and the discovery of the typicity of this town, have brought in recent years new tourists, new residents and as a result a town in full expansion.
There are countless projects under study and in progress, making of this fishing town, until just over 20 years ago, a real pearl, because there is an evolution without losing what characterizes it: A ALMA OLHANENSE (THE OLHANENSE SOUL). 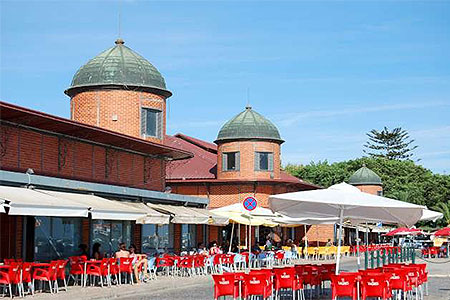 The municipal markets of Olhão, one of the ex-libris of the town of Olhão, began to be built in 1912 and were inaugurated four years later.
For nearly a century, they have been one of the illustrated postcards of Olhão and a must for tourists and residents.

Large recreation area of the town, attracts the population and visitors for moments of walking/promenade and socializing. Along the year, several cultural events take place here. 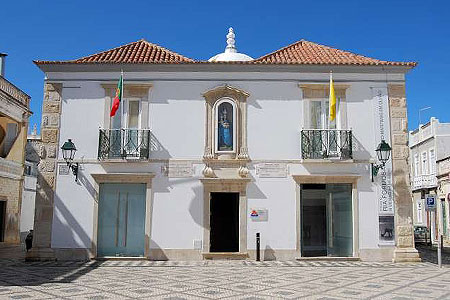 The building Compromisso Marítimo of Olhão is currently the museum of the town. It is a building with a very important historical value that is worth visiting because, in addition to its own history, it presents during the year various temporary or permanent exhibitions about topics related to the town and its surroundings, as well as, to the municipality. 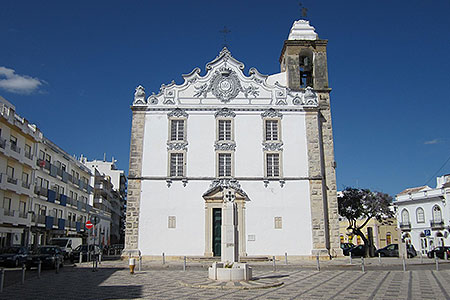 THE MOTHER CHURCH OF OUR LADY OF THE ROSARY

The construction of the Church of Our Lady of the Rosary, present Mother Church of Olhão, began in 1698, opening to the worship, still unfinished, in 1715, being the contract for the construction of its bell tower dated from 1722. On the façade, one can read: "At the expense of the men of the sea of this village, this temple was made new, at a time when there were only a few huts". Because of its magnificence, it draws the attention of tourists visiting the historic quarter of Olhão, in the town’s center, where it is situated. 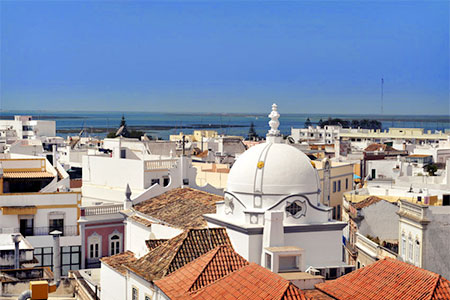 The historic quarter is one of the most important places to be seen and visited in Olhão because of its typicity and history. The cubist architecture is unique in the country. 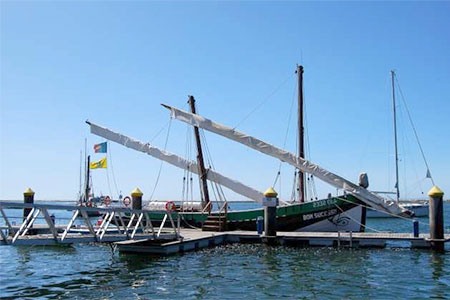 The replica of the original boat is anchored next to the Municipal Markets of Olhão and allows residents and visitors to feel as a part of the history of the heroic Olhanenses who have sailed towards Brazil. It is possible to book some tours along the Ria Formosa in this vessel of two masts and two triangular or bastardian sails, with about 18 meters long. The Caique Bom Sucesso before "staying" in the history of Olhão as a heroic reference, it was used in deep sea fishing, in the Mediterranean and North Africa and for the transportation of goods to cities such as Cadiz, Tangier, Lisbon or Oporto.

Your message has been sent. Thank you!